please explain what the orange train is supposed to do in the station, when the yellow train hasn’t even finished loading?

Loading as well (might be multiple resources, in my case there are actually a third and a fourth train, two for passengers, one for ore, one for goods, same route), or maybe even passing (although I would usually build a seperate track for that). Keep in mind that the examples I made only show the problem area, not the entire track, nor the exits. Depot placement is also not how it looks, but I just drew it like that for simplification.

if trains would bunch up and then just choose another platform you might end up having three platforms blocked by three trains of the same line, all waiting for loading and your other two lines that need to go into the station can’t even use the station.

This is actually the scenario I both expected and wanted, like in Transport Tycoon (trains are free to pick and choose lanes at stations). I always make sure that there are enough free lanes for a pass, I’m used at building this way.

what you are trying to achieve is neither prototypical nor makes any sense, so don’t compare it to openttd. TF is not openttd, obviously some stuff will work differently and you have to get used to it. what is a roro-station supposed to be?

Your tone seems a bit off somehow, like you’re annoyed. Excuse me for thinking this was like OpenTTD (it’s not like this game didn’t get advertised everywhere for being exactly that – Transport Tycoon with better graphics. Then I heard the Big Boss tune, which strengthened that view). But I see the error of me expecting this game to work in the same fashion.

A RoRo Station is both fun, practical and prototypical (well, maybe not in this game)! This method of rail construction got applied very often in OpenTTD and Simutrans – example below. 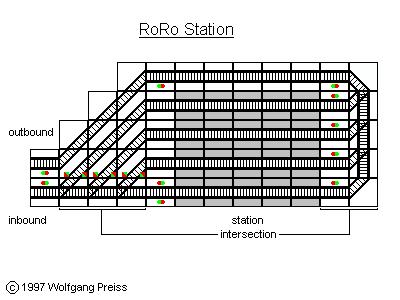 in this case there is no bug or lack of feature (the only thing lacking is waypoints, but they’re on their way), you’re simply doing it wrong.

I never mentioned a bug and was under the impression I was overlooking something, as should be obvious from my post. For me doing it wrong, well I can totally accept that. I assumed this game would work like OpenTTD, which it obviously does not.

I see the point about lines. Trains sharing the same line will apparently only accept the station lane designated to that line, so I should make multiple lines (even though all trains share the same route) if I want two trains coming in from the same direction loading at the same station at the same time using different lanes.

I think what a large part of the community wants (and expected, at least I know I did), is literally an OpenTTD remake with better sounds and graphics (same mechanics, but not grid based). Simple.